New Kids on the Block fans — also known as “Blockheads” — found a way to give back to the five Boston brothers that make them smile. Collectively, joining together on Twitter, fans of the still popular 80’s boy band raised over $8,000 to put a full page ad in Billboard Magazine — out in stores March 30.

Donations were collected from nearly 30 countries for the ad, which congratulated NKOTB on their latest album, “10” which hits stores on April 2. Donnie Wahlberg, Joey McIntyre, Danny Wood, Jonathan Knight, and Jordan Knight were presented with framed copies of their ad during their record release party at the Orpheum Theater in Boston on Saturday.

“Fans in the theater held up heart shaped posters with #ThankYou written on them while those on Twitter who were unable to attend the show supported the moment by changing their profile pictures,” explained Blockhead, Mabelle.

New Kids on the Block fans’ efforts didn’t go unnoticed by the guys, either.

The New Kids on the Block gave their audience a special treat at the Orpheum Theater this weekend, but the fans gave back with a special surprise to show their appreciation to the “five hardest working guys in show business.”

The guys were at Boston’s Orpheum Theater on Saturday for the record release party of their latest album,”10,” which drops on April 2. Fans enjoyed an intimate setting featuring the guys crooning tracks off the upcoming record and a Q&A session. However, in a twist of events, several die-hard New Kids fans were invited on stage to present their boys with five plaques; plaques with a message that can be seen in April’s issue of Billboard magazine:

25 Years Ago, We Showed the World That Despite the Odds, We Will Always Hang Tough

Five Years Ago, You Came Back to Show That While the Music Industry May Evolve, The Love Between Their Group and Fans Remains

Congratulations New Kids on the Block on the Release of “10”

Love,
Your Blockheads and a Million Sisters Worldwide

As the band accepted their plaques, a few tears were shed as Jonathan Knight took to the microphone to personally thank his fans.

Jordan Knight of New Kids On The Block joined Gregg Daniels, Fast Freddy and Sue Brady live in the Mix studio Friday afternoon in anticipation of the group’s three-night concert event at the Mohegan Sun Arena. New Kids are touring with fellow pop idols 98 Degrees and Boyz II Men and play the Mohegan Sun starting May 28.

The gang asked Jordan about his working relationship with the rest of New Kids on the Block, and how they decide who does what part. He explained that because the guys’ voices are all so unique, they don’t need to argue over certain parts because only one of them is perfect for each one.

They also talked about last year’s New Kids/Backstreet Boys concert at Fenway Park, which could have been rained out – but instead the groups turned the stage into a slip n’ slide while every fan stayed and endured the storm to enjoy the rest of the show.

Visit Mix1041.CBSLocal.com to listen to the interview.

New Kids On The Block will celebrate their new album, “10” with a very special record release event at Orpheum Theater on March 30th in their Boston hometown, where it all began! 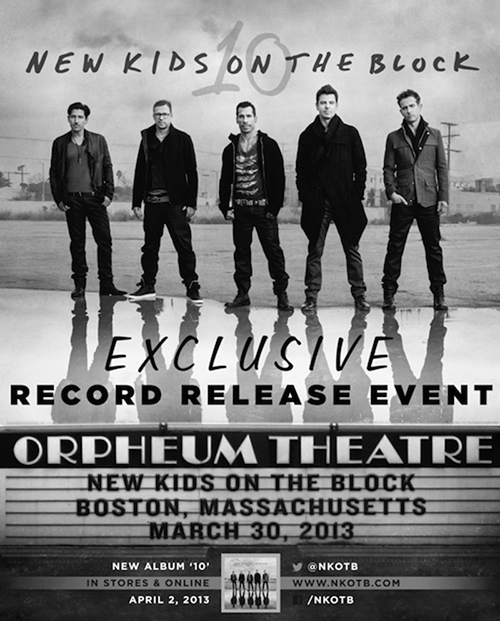 New Kids On The Block announced plans for new music earlier this year.
The group will release brand new album “10” on April 2nd with the first single “Remix (I Like The)” available NOW!

Donnie visited Kathie Lee and Hoda at the TODAY SHOW earlier today.
They were mainly talking about ‘Boston’s Finest’ but also the New Kids on the Block.
Enjoy watching the interview!

Visit NBCNews.com for breaking news, world news, and news about the economy

The movie industry has been pretty good to Boston over the last couple years, sending many more Hollywood productions to the Hub. But things have been quieter on the television front. And as much as we love Cheers, it might be nice for Bostonians to see themselves on the small screen in a show that didn’t end twenty years ago.

The tides seem to be turning, but we’re not sure that’s a good thing. Last month A&E debuted Southie Rules, a miserable misfire that offended basically everyone. Not because it featured local yokel caricatures (“Massholes” love to laugh at themselves), but because its transparently scripted approach to an “unscripted” series was so profoundly embarrassing and unfunny, I wanted to gouge my eyes out with a Dunkin’ Donuts straw. Next month VH1 rolls out Wicked Single, a reality show about a fun-loving group of twenty and thirty-something friends who enjoy hanging out, pahtying hahd, and embarrassing grandma in her final days. (The show premieres on St. Patrick’s Day because – drunk and Irish, get it?) And CBS recently ordered a pilot for “The McCarthy’s,” a sitcom that will star comedian Brian Gallivan as the gay son of a straight-laced Irish-Catholic family, which would have sounded really funny and edgy in 1996.

Sigh. We can do better. And we have, it seems, with Boston’s Finest.

The Boston Police Department has the right stuff.

“It’s a unique opportunity. People have an idea of what the Boston Police do, and they are going to get a real-life version,” said South Boston-raised Stanton, 46. “If you are expecting ‘Cops,’ you are in for a surprise.”

Stanton and Lawton, 36, are among 19 members of the Boston Police Department profiled on- and off-duty.

Stanton, a 24-year veteran of the force, came to the project having previously done “Cops” and a Spike TV program.

Actor/musician Donnie Wahlberg held a red carpet premiere for the TV show Boston’s Finest. Wahlberg is the executive producer of the reality show about Boston police officers. The Revere Hotel held the event where Wahlberg presented the first two episodes of the show with its “stars” and others involved in production. About the show (from TNT‘s press release):

This February, TNT is going to take viewers on a dramatic journey into the lives of Boston police officers – both on and off the job – in Boston’s Finest, a gripping new unscripted series from executive producers Donnie Wahlberg (Blue Bloods, New Kids on the Block) and Seth Jarrett and Julie Insogna-Jarrett (Celebrity Ghost Stories). Centering on the men and women of the Boston Police Department, Boston’s Finest will offer viewers an up-close and very personal look at what it takes to protect and serve one of America’s greatest and most distinctive cities. The series is set to premiere Wednesday, Feb. 27, at 9 p.m. (ET/PT), exclusively on TNT.

Unlike many unscripted series about law enforcement, Boston’s Finest will follow the fearless actions of the entire Boston Police Department, including patrol officers, detectives, special task forces and members of the SWAT Team, the Fugitive Unit and highly decorated Gang Unit.