New Kids on the Block just announced their upcoming “The Package” Tour on ABC’s “The View”,
which includes the special guests Boyz II Men and 98 Degrees!

The tour will lead them through 28 stadiums in the United States and Canada (as of January 22nd, 2013). 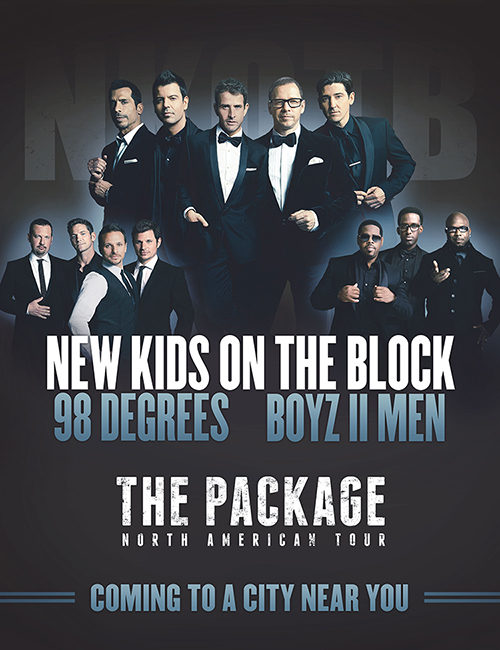 But that’s not all!

The new song “Remix (I Like The)” premieres Friday, January 25th on “On Air with Ryan Seacrest”.

The official Announcement reads as follows:

(New York, NY – January 22, 2013)
Even though the New Year has just begun, New Kids on the Block fans already know they have a lot to look forward to in the coming months! As announced today on their total takeover of The View, NKOTB revealed plans of a 2013 summer headlining tour. Very special guests multi-platinum selling artists 98 Degrees and Grammy Award winning Boyz II Men, the best-selling R&B group of all time, will be opening for NKOTB on their tour, aptly titled THE PACKAGE TOUR. This is the first tour for 98 Degrees in over 12 years! NKOTB surprised The View audience with a special reveal of 98 Degrees and Boyz II Men, giving fans a taste of THE PACKAGE TOUR when all bands performed a capella, sending the audience into a frenzy. The tour kicks off on May 31st in Uncasville, CT and tickets can be purchased starting February 2 on www.ticketmaster.com. American Express card members can get advance tickets beginning this Friday, January 25 at 10:00 AM (local time).

The multi-platinum selling New Kids on the Block also announced plans for new music. The group will release brand new album “10” on April 2nd with the first single “Remix (I Like The)” dropping on iTunes January 28th. The group has been quietly spending the past six months working hard, writing and recording the album.

Fans caught wind of these secret studio sessions and have been clamoring for information after rumors spread about the 2013 plans of new music and a possible tour. After announcing on The View, NKOTB, 98 Degrees and Boyz II Men set out on a day long media blitz stopping by outlets like Access Hollywood, CNN, E!, ET, EXTRA, OMG! Insider, VH1 Big Morning Buzz, US Weekly and Rolling Stone. Social media has been a buzz ever since the official reveal with no signs of slowing down.

“Ladies, we’re coming for you,” said NKOTB member Donnie Wahlberg. “This is going to be the craziest year yet-the single, the album, the tour with 98 Degrees and Boyz II Men … We can’t wait to give fans ‘The Package!’”

“We are really excited to get back on the road together and tour with our friends in NKOTB and Boyz II Men. Looking forward to playing our hits and trying out some of our new tracks too,” said 98 Degrees’ Nick Lachey.

“We couldn’t be more excited to join New Kids on the Block and 98 Degrees on ‘The Package Tour.’ This summer is going to be fun and fans will not want to miss it,” said Shawn Stockman. Wanya Morris agreed saying, “This has been in the works for a while… ‘The Package’ is on its way, and we’re going to deliver.” Added Nate Morris, “We plan on bringing it, mark your calendars.”

Please visit www.ThePackage-Tour.com or Ticketmaster.com for up to date information or join the discussion at #thepackagetour.

Block Nation presales begin January 24th. You must be a Block Nation member in order to participate in the presales. Not a member yet? Join today!